Musical Passage: A Voyage to 1688 Jamaica 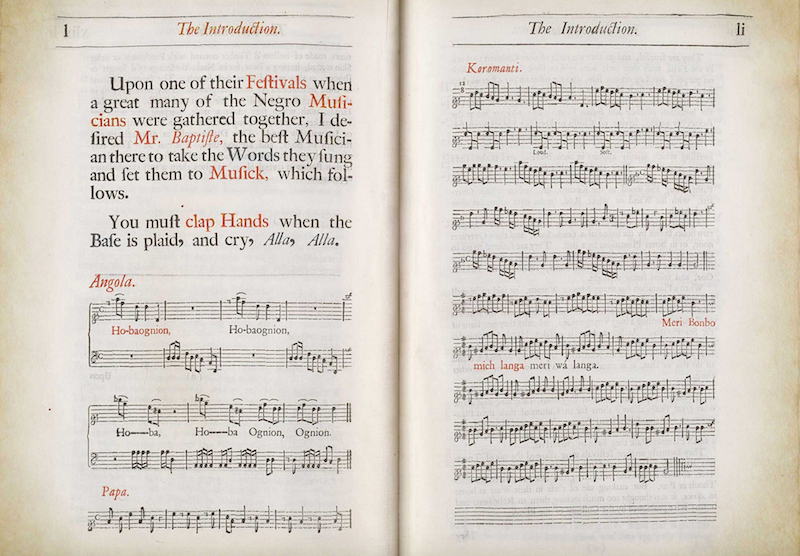 Developed by historian Laurent Dubois, PhD candidate in English Mary Caton Lingold, and composer-scholar David Garner, Musical Passage uses a digital format to explore a unique artifact of early African diasporic music. The site is designed around two pages from eighteenth-century British naturalist and collector Hans Sloane’s A Voyage to the Islands (1707), which documents his time in Jamaica in the late 1680s. The pages of Voyage that have been placed at the center of this site present notation of songs played at a “festival.” This material is precious and fascinating, representing the earliest notation we have of music produced by enslaved Africans in the Caribbean or North America. The performers whose music is represented and interpreted here were likely survivors of the Middle Passage who may have been playing music they had learned in their homelands. They may also have been in the process of creating entirely new performance traditions.

The goal of the site’s authors is to encourage users to slow down and to linger on the page and in the songs so as to learn more about the music and its context through the experience of a series of musical interpretations of the pieces Sloane presents. The interpretations provided are meant to serve as so many invitations to encounter and enter into dialogue with this remarkable fragment and thus to find a way into a much broader and more foundational musical history of the Caribbean and the wider Atlantic world.

Musical Passage is a fascinating and well-conceived example of digital scholarship that makes an important contribution to the fields of Atlantic and Caribbean history and ethnomusicology. There is a direct—and successful—effort here to combat the phenomenon of presumed “loss in” and “silences of” the Afro-Atlantic archive. The site’s authors present a compelling articulation of the importance of their methodological approach and of, especially, the singular value of the digital to grappling with the diversity of textual artifacts that must be examined in the context of the Americas (and the Afro-Atlantic, more broadly). They take seriously their role as mediators and strike a fine balance between guiding and directing the user’s experience of the site. In their rigorous engagement with a fragment/trace from the archive and their fundamentally interdisciplinary approach, they offer a model for collaboration among researchers in the humanities and social scientists, experts from outside the academy, and university libraries.

The site design is both aesthetically pleasing and illustrative of the project’s substantive contribution. The considered decision to use the artifact itself as landing page and central querying point to which the user must constantly return beautifully marries the object’s multidimensionality, the interactivity of the site, and the interdisciplinarity of the approach.

As the project develops further, it would be desirable that the authors extend its value for a wide digital scholarly community by more explicitly articulating—by documenting, in fact—critical elements of the “back-end.” What technological stack undergirds the project (file types, data models, platforms, etc.)? What plans have been made (institutional relationships concretized) to assure the preservation (support/maintenance) of the project for the future? How far into the future do those plans remain viable? Also, given the range of expertise and positioning of the three site authors (one full professor, one graduate student, one scholar-musician) and of the institutional teams with which they collaborated, we hope that the site will make explicit the precise nature of the participants’ respective contributions.

It would also be desirable that the site authors situate the project with respect to existing, related digital scholarship projects. How is Musical Passage in dialogue (methodologically, substantively, or otherwise) with other Afro-Atlantic digital humanities (DH) projects? Has it made use of other DH resources in its own construction? Might the authors consider adding a “For Further Consideration/Reading” section that would include both digital and analog bibliographical references?

Response from the creators of Musical Passage

“seeking to combat the silences around Afro-Atlantic music”

We were delighted to receive the positive feedback articulated in the review of our draft materials for Musical Passage. We are glad that the site design—particularly the use of the page as the central hub for the site—seems to do our intended work of both calling attention to and seeking to combat the silences around Afro-Atlantic music, and we are glad our role as mediators seems effective. Since we have particularly enjoyed the extent to which this has been a richly collaborative project, we also are pleased that it seems to offer a broader model for this kind of scholarly engagement with a particular set of materials.

We also appreciate reviewers’ suggestions for articulating and thinking through some questions we have not given enough attention to at this point. The review encourages us to explicitly discuss some of these questions with our Web designer, Marc Harkness, in order to find a way to document the “back-end” of the site. Mary Caton Lingold will specifically be working with Harkness to offer some discussion of this directly on the site itself, in the “About” page, so that this becomes not just a page describing our backgrounds and the project but also a kind of meta-cartography of how the site has been built.

We really appreciate the idea of mentioning other sites that helped inspire Musical Passage. There were a few avenues: an early site that Harkness and Lingold collaborated on helped us understand and think through how to showcase sound, and we began by looking at two sites by Vincent Brown, especially his Two Plantations, which helped to inspire what we were doing in terms of visual design and intellectual foundations. The idea of acknowledging this is a great one and is something we will also do on the site. Finally, we appreciate the idea of mapping out each of our roles in the process and what those contributions were, probably in some kind of narrative style, one that attempts to condense the process of collaboration through which Musical Passage was produced. This, along with the material about the design of the site, will make the “About” page a space through which to illustrate, showcase, and perhaps model the kind of collaboration that makes a (hopefully successful) digital humanities project happen.

The issue raised in the review about the long-term viability and existence of the site is a vital one. We decided to construct the site on an external server to give us maximum flexibility to develop, revise, and tinker as we go. However, the review rightly emphasizes the need for us to think about the long-term life and viability of the project. Part of the complexity here is that we ourselves see this site as just the beginning of what we hope will be a broadly generative process, one that may lead to performances, which in turn will produce new audio and video that we may need to find a way to showcase (and to archive) in turn. So some of the questions about the long-term storage of the site may not be something we can work out until the site transforms and reshapes over the next years to incorporate the artistic work we hope that it may inspire.

One option we have considered is to see if we can incorporate Musical Passage in some way into the Duke University Libraries site, since our project is built around an object in the Rubenstein Rare Book and Manuscript Library’s collection. This would ensure some kind of maintenance infrastructure beyond what we can provide. Whether this kind of arrangement is possible or not, we will also seek to archive the site with Duke University Libraries and also to create a digital object identifier (DOI) for the project. This is something that Lingold has previously done with a different digital project and for which the library has a template. This process, which involves producing a variety of files from the Web page that both archives the form of its construction and makes videos of how it is navigated, will assure some kind of archiving and storage of the site over the long term.

Finally, the suggestion that we incorporate citations of scholarly material into the site is also an excellent one. Since the “About” page is already going to incorporate a great deal of discussion about the process of production of the site, we will likely provide citations at the end of the presentation of the written material that will be collected in a scrollable essay format as part of the site. We have at times considered whether to offer a downloadable PDF version of the entire essay as well, which might also include a full bibliography of sources, and we welcome thoughts on whether this approach could be valuable. We have, among ourselves, debated the question of how to make sure the experience of the site remains one oriented toward engaging the page of Sloane that we focus on and especially one that pays attention to and dwells within the sonic experience we are hoping to reconstruct and evoke. As the review suggests, this can be balanced with a variety of interpretive and analytical moves that foreground both the historical scholarship we are drawing on and the methodological and process questions that have been raised in the production of the site.

Laurent Dubois is Professor of Romance Studies and History and the Faculty Director of the Forum for Scholars & Publics at Duke University. He is the author of six books, including Avengers of the New World: The Story of the Haitian Revolution (2004), Haiti: The Aftershocks of History (2012) and most recently The Banjo: America’s African Instrument. In 2016-2017 he will be a Fellow at the National Humanities Center.

David K. Garner will begin as Assistant Professor of Composition and Theory at the University of South Carolina in fall 2016. He is a composer whose works often draw on other music as a point of departure, from Beethoven to bluegrass. Awards include a Charles Ives Scholarship from the American Academy of Arts & Letters, an ASCAP Young Composer Award, and first prizes in the OSSIA, Red Note, and NACUSA competitions.

Mary Caton Lingold is a doctoral candidate in English at Duke, where she is completing a dissertation on early Afro-Atlantic literature and music. She is co-editor of the web collection Provoke!: Digital Sound Studies, and a book by the same name and under contract at Duke UP. Her article on music in Caribbean travel narratives is forthcoming in Early American Literature. She also directs the Sonic Dictionary, a crowdsourced database of audio recordings.